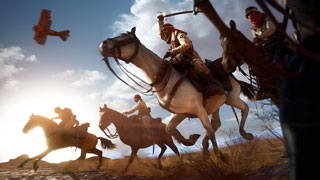 If you want to get a closer look at the Battlefield 1 campaign, EA is streaming it later today.

Earlier this week, we saw the first campaign trailer for Battlefield 1. If that's not enough to sate your need for info on DICE's upcoming shooter, EA's going to showing off more of the campaign in a livestream later today.

The show is being broadcast from TwitchCon, which kicks off today and runs through Sunday in San Diego. While there's no word on exactly what will be shown off yet, we're supposed to be shown all-new gameplay footage. Here's the tweet announcing the stream:

You can watch the stream on the TwitchCon streaming page at 4 PM ET this afternoon.