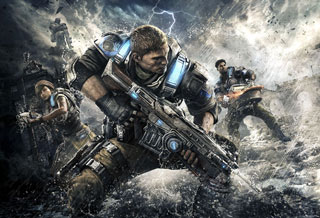 It's time to start downloading Gears of War 4 on PC - all 80 GB worth.

Microsoft has announced that you can now begin pre-loading the PC version of Gears of War 4. The announcement came in a forum post on the game's official site.

Pre-loading on PC is available through the Windows Store to anyone who pre-ordered Gears of War 4 on PC or Xbox One. As was announced at E3, Gears 4 is a Xbox Play Anywhere title, which means that if you buy it on either PC or Xbox One, you'll get access to a digital copy on the other platform. Apparently, the game will automatically download in the background if you pre-ordered, but it will do so very slowly unless you initiate the download yourself.

Of course, you can't download unless you have the room to store it, and Gears of War 4 will need 80 GB of hard drive space. That's a pretty substantial chunk, coming in at roughly twice the size of The Witcher 3.

Gears of War 4launches on October 11, but if you bought the $100 Ultimate Edition, you can start playing four days early, on October 7.