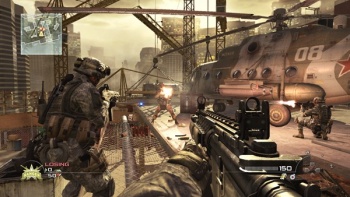 You won't be able to sell your copy of Infinite Warfare and keep playing the Call of Duty 4 remaster.

"Modern Warfare Remastered is a full game download (game disc must be inserted to play Modern Warfare Remastered). Internet connection required," states the line in question. It was previously announced that MW: Remastered would be a digital-only product packaged with premium editions of IW. We naturally assumed that as with other digital products, it would simply be a download code that you redeemed once and was then tied to your account. It now appears that Activision is forcing players to keep their Infinite Warfare discs in order to play.

Obviously, if you purchase a digital version of Infinite Warfare, this will no longer apply.

Activision has not said if Modern Warfare Remastered will ever be sold on its own.

We've reached out for confirmation.