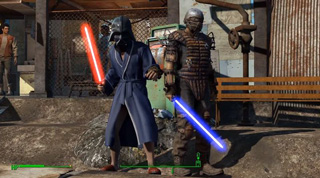 After a lot of back and forth, Sony has finally agreed to allow mods on the PS4 version of Fallout 4 - with a pretty heavy restriction.

Today, Bethesda Softworks announced that mods were actually, really coming to the PS4 version of Fallout 4, as well as the upcoming Skyrim: Special Edition HD remaster. The bad news is that we still don't have an actual timeframe for Fallout 4. All we know is that Skyrim mods will come first, and Fallout 4 mods will come later, and as Skyirm: Special Edition doesn't launch until October 28, don't expect Fallout 4 mods until November at the earliest.

Secondly, both Skyirm and Fallout 4 mods for PS4 come with one, rather heavy restriction: they cannot use any external assets - only assets that come with the game. That means mods that add new textures and models will not be compatible with the PS4 version of the game.

When we last heard about the mod situation, Bethesda flat-out blamed Sony for the delay, stating that the publisher was refusing to approve "user mods the way they should work". It seems that they have finally reached a compromise, and that compromise involves stripping mods of external assets.

Additionally, Bethesda announced that 4K and PS4 Pro support would be coming to both of these games.