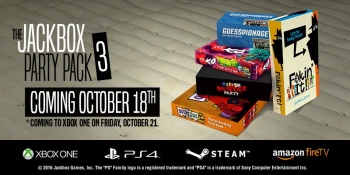 We love Jackbox Games here at The Escapist, and The Jackbox Party Pack 2 has been a regular for our Tabletop Stream sessions. So, we are pretty excited that the next installment, The Jackbox Party Pack 3 now has a solid release date. The really good news is that it's releasing very soon: October 18 for PC, PS4 and Amazon Fire TV. Xbox One gamers will have to wait just a little bit longer, until October 21.

Just like the previous installments, no additional controllers are needed, as players can use any internet-capable smartphone, tablet, or other such device. There's also support for up to 10,000 audience members, and other "streamer specific features".