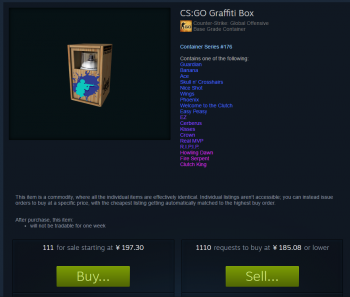 Valve has decided to monetize even the humble spray. Purchasing a "Graffiti Box" allows you to use a single spray 50 times.

"Sprays" are an old-school staple of shooters, allowing players to spray a pattern onto the wall or floor of a map. Often used as a kind of taunt after killing a player, Valve games like Team Fortress 2 and Counter-Strike allowed players to upload and use their own custom sprays. Of course, there was always the odd obscene spray, but it was all in good fun. Now, Valve has decided to monetize the humble spray. If you want to use sprays in Counter-Strike: Global Offensive, you'll have to purchase a "Graffiti Box" - a limited use item that allows you to spray a specific spray just 50 times.

Valve outlined the whole system in its Graffiti Update post. There are currently three ways to get in-game graffiti boxes: players have a chance to receive graffiti as a free weekly drop for ranking up, Graffiti Boxes featuring art created by Steam Community Artists can be purchased from the store, and individual graffiti patterns can be purchased from the Steam Market. As of time of writing, Graffiti boxes are going for anywhere between $2 and $30 a pop.

The Counter-Strike community is justifiably perturbed. As well as taking away a previously free feature and re-introducing it as yet another monetization stream for the game, some players have already found some in-game ways to abuse sprays in order to give themselves an advantage. For example, an imgur user shows how spray transparency issues on windows can effectively allow players to "hide" behind them on certain maps:

Valve has put together an F.A.Q if you have any further queries. What do you guys think about this one?