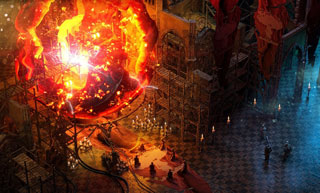 Wasteland 3 kicked off its crowdfunding campaign on Wednesday of last week. Three days later, on Saturday, Wasteland 3 hit its goal of $2.75 million. inXile posted an update celebrating the news, and also revealed some new stretch goals to shoot for.

Speaking to backers in the update, inXile wrote, "Without you, we would simply not be able to maintain our independence and keep fully true to our visions for great RPGs that you love. We also cannot fail to mention those who have chosen to invest in the financial performance of the game - their contributions have also been invaluable. Your trust and support means the world to us. So kick back, put your red boots up, and have some squeezins to celebrate."

Here are the stretch goals added to the campaign:

Wasteland 3 has raised over $2.85 million at time of writing, so the first stretch goal has already been unlocked. They've also added a CrowdOx option to allow backers to use PayPal. The campaign ends in 24 days, on November 3.

Keep in mind that the project isn't set to launch in Q4 of 2019, so if you're at all hesitant about throwing down your money, you should be aware that the game is still a ways off. You can find all the information that you need on the crowdfunding campaign on the game's page on Fig.