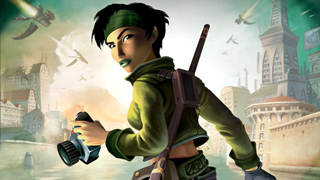 This month's Ubisoft anniversary free game is Beyond Good & Evil.

Ubisoft has been giving away a free game every month since E3 to celebrate its 30th anniversary. So far they've given away a number of great titles, including Prince of Persia: Sands of Time (June), Splinter Cell (July), Rayman: Origins (August), and The Crew (September).

For October, Ubi's got another great game to give away: Beyond Good & Evil. This one has been in people's minds in recent years as there's been on-again, off-again teasing of a possible sequel. There's been a teaser trailer, then the news that the sequel was still alive, then Ubi said they consider the original game a mistake. There was even a push to sell Rayman: Origins as a way to show support for BG&E creator Michael Ancel. All that was culminated with the official announcement of the sequel on the game's Facebook page last week.

While you wait for the sequel, you can go catch up on the original. Just head over to the Ubi30 website, log in, and click the button. As usual, you'll have to use Uplay to download and play. This giveaway will only last a month, so don't miss out.