An update to the Steam API will allow users to customize their PS4 controllers in the same way they can with Xbox and Steam controllers.

The Xbox 360/Xbox One controller has always been the go-to "default" controller for PC gaming, mostly due to the fact that both Windows and Steam have tremendous plug-and-play support for the device. Getting Sony and Nintendo's controllers working on the PC has always been quite a bit more finicky, but an upcoming update to the Steam API should make things a bit easier for PS4 controller fans.

At Steam Dev Days today, Valve's Jeff Bellinghausen explained that the update will allow players to completely customize their PS4 controller layout via an in-game UI. It will also allow them to tailor the functions of the PS4's touchpad and gyro features - options that aren't available today when using the DualShock 4 with Steam. 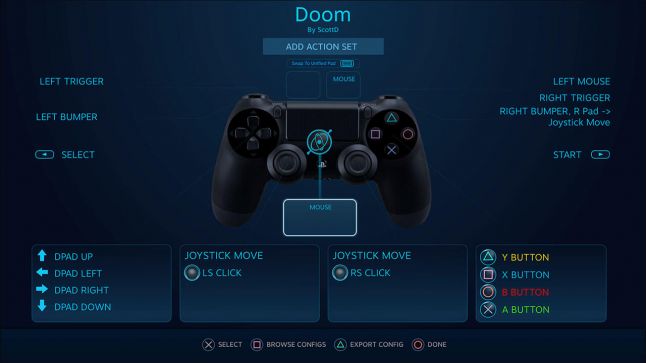 Co-presenter Lars Doucet, developer of Defender's Quest, explained, "Believe it or not, when you use the PS4 Controller through the Steam API, it's exactly the same as a Steam Controller. You make the exact same API calls, you only get actions, not inputs, and the Steam API takes care of everything."

Valve also said that a similar level of support for "other" controllers was also in the pipeline, although he did not specify which controllers in particular.