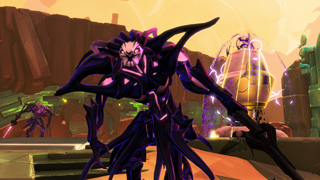 Gearbox's shooter is getting new content for both single and multiplayer today.

Since Battleborn launched back in May, Gearbox has added a few items of content to the game. Thus far, it's consisted of three new characters. Today, those offerings are expanding, as the developer rolls out the first of five planned story operations.

The new operation is titled Attikus and the Thrall Rebellion, and will tell a film-noir style tale with Attikus in the main character's role. There are plenty of new rewards as well, including two new skins for each of the 28 characters in the game, six new titles, three new taunts, and Faction Commander packs that are earned by hitting the max score in a mission.

Attikus and the Thrall Rebellion is free to anyone who owns the Season Pass or Digital Deluxe editions of Battleborn. If you don't, then it will set you back $4.99, or 700 platinum in the in-game store.

Even if you don't buy the story operation, there's new content coming to the game. The new, free PvP mode, Face-Off, launches today as well. In this new mode, you'll take on loads of Varelsi, collect the masks they drop, and deposit them. The first team to collect 500 masks wins the game.

While that sounds fairly simple, the Varelsi will increase in difficulty as the 15-minute round progresses, and you'll have to deal with the other team as well, who can kill you to take some of your collected masks. Since the deposit location for the masks is in the center of each map, things may be a bit contentious. You can learn more about the Face-Off mode in this offcial blog post.

There are also a number of Halloween-themed skins hitting the in-game marketplace later today, although they'll have a hard time topping the Frankenstein-style zombie skin that's already there for Ghalt.

These are great additions for Battleborn, but you have to wonder if it will be enough to pull people to a game that has struggled for players, despite being quite fun. Gearbox isn't stropping here, as there's a fourth new hero, Kid Ultra, a new PvP mode, and another story operation planned for release in the coming weeks. It's good to see that, despite its troubles, Gearbox hasn't given up on the game.

All of today's updates will start rolling out at 5 PM ET.