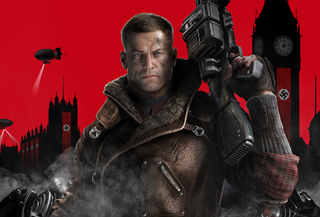 The next game in the Wolfenstein series is being teased again - this time by the voice actor who plays B.J. Blazkowicz.

If you were paying to attention to our E3 coverage, you probably remember that there was a new Wolfenstein game teased during Bethesda's press conference. Thanks to a new interview, we now have another indication that the game is real.

Brian Bloom, the voice actor who played protagonist B.J. Blazkowicz, was interviewed by TwoLeftSticks about his role in the upcoming Call of Duty: Infinite Warfare. In the course of that interview, the conversation came around to the Wolfenstein series. When asked about the future of the series, Bloom said,

"I'll be safe with this answer. If you look at Bethesda's E3 2016 lineup there was a title hinted at in a cool way. It sparked a bit of wildfire. That subtle, very simple DOS language, going through the titles. Perhaps we're working on that as we speak."

While a statement from a voice actor isn't an official confirmation, it seems more and more likely that we're going see Wolfenstein: The New Colossus announced in the near future. If it lives up to the last two games, it will likely be worth checking out.