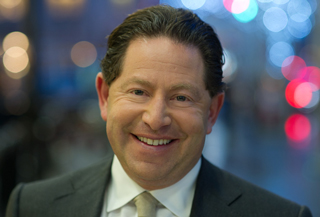 Activision has been moving into the eSports arena more and more of late, including its purchase of MLG last year. But its CEO sees an even bigger future for eSports, and he's been talking about its potential in the future.

Speaking at Vanity Fair's New Establishment Summit yesterday alongside CBE Chairman and CEO Leslie Moonves, Kotick said that he expects that he'll be negotiating broadcast rights for Activision games with US cable networks in the future. Currently, those games are broadcast through Activision's own MLG. Of course, Kotick was willing to have that change. He said,

"The real question though is the way they're watching today is over-the-top, so we have our own channel MLG, which is our broadcast channel for professional eSports. What we view our opportunity set as if Leslie or ESPN wants to pay for the rights, a greater amount, that we can monetize on our own channel, we'll take that."

Kotick went on to say that Activision's reach was so big, that the company is five times the size of streaming giant Netflix, and that this reach means that there is a ton of potential for the future.

"If you think about our players, if you take Call of Duty, we have 40 million monthly active users-these people are spending hours of their day playing a game, an organized competition-that's the same size as the preseason NFL. These leagues like Call of Duty or Overwatch have the potential to be the next NFL or NBA."

eSports may never overtake the major televised sports of our day, but it's certainly poised to continue its growing popularity going forward. With Overwatch and Call of Duty in its pocket, Activision will certainly be a big part of that.