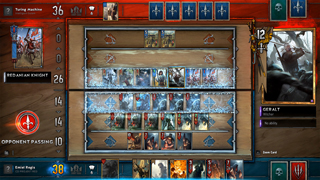 The closed beta for Gwent: The Witcher Card Game starts on PC and Xbox One today, but not on PS4 yet.

If you've been waiting to get your hands on the Gwent: The Witcher Card Game beta, your wait ends today. CD Projekt announced that the beta has begun on PC and Xbox One, and will be coming at a later date to PS4.

Also coming later will be the Windows 10 Universal Windows Platform beta. Gwent will also be available as an Xbox Play Anywhere game. CD Projekt is expected to add features throughout the duration of the beta test.

CD Projekt said that the first wave of invites will be hitting inboxes today. If you haven't signed up yet, you can still do so on the game's official website.

If you have any questions about Gwent, you can find answers in the official FAQ.