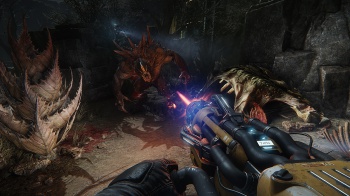 While Evolve's servers will still remain active "for the foreseeable future," the game will receive no further official support or updates.

It looks like it's the end of the road for Turtle Rock Studio's asymmetrical shooter: Evolve. Despite a considerable uptick in players after going free-to-play, it looks like the title is no longer worth the developer's time, as the studio has announced that it will be ceasing all support and updates.

"Unfortunately today is the last day that Turtle Rock Studios can work on Evolve," said Turtle Rock in a blog post. "This is the life of AAA game developers who aren't self-funded and don't own their own IP. We don't get to make the call. We all know that going in but we still sign the dotted line because we love what we do."

Fortunately, for those who are still enjoying the game, Turtle Rock said that Evolve's servers would remain active "for the foreseeable future," so if you've dumped a bunch of money on the game's pricey DLC, you'll still get to play.

"It's always hard to leave one of our games behind. Left4Dead was no different and now it's Evolve's turn. There will always be a special place in our hearts for our past projects. No matter what happens with Evolve in the future, we'll know it was born in this studio and developed by this team alongside this beautiful community," continued the statement.

It's a shame, really. Evolve was a really cool concept and I loved it when I first played it, but questionable business practices ruined the experience for many, and the studio had lost too much faith that even a free-to-play conversion couldn't save the title.