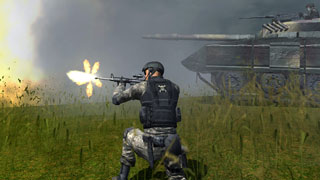 THQ Nordic has expanded its games portfolio again - this time by buying all of NovaLogic's games.

THQ Nordic has acquired quite the portfolio of games, including the bevy of games it acquired at the THQ auction. Now it's picked up another group of classic titles by purchasing all of the games owned by long-time developer NovaLogic.

The purchase gives THQ Nordic the entire NovaLogic portfolio, as well as the company's trademark. That means that THQ Nordic now owns all of the following games:

That list is not all-inclusive, as the official statement ends with the words "and more..." In that same statement, John Garcia, owner, founder and CEO of NovaLogic Inc. said of the deal, "After 30 years of creating ground breaking Computer and Video Games we are proud to pass the baton to THQ Nordic. As individuals, they are enthusiastic gamers and as a company have shown the agility and acumen needed to propel our industry towards a much-needed reset. We are happy to see the franchises we created in such capable hands."

It sounds like THQ Nordic may be thinking about doing more with these IPs than just sitting on them, as Reinhard Pollice, Business and Product Development Director for THQ Nordic is quoted in the statement as saying, "We are extremely satisfied with the new additions to our portfolio, and also very thrilled about how to continue some of said franchises, we are open for talks in this regard if any developer approaches us with a concept for a potential sequel to any IP."

We'll have to see where it goes, but the company has already remastered Darksiders and talked about a Destroy All Humans sequel, so there's definitely hope.