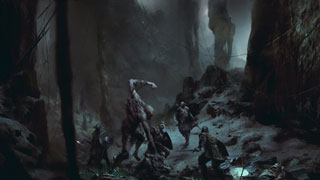 Former Battlefield developer David Goldfarb is showing off Project Wight, the first game from his indie studio The Outsiders.

Back in 2015, former Battlefield developers David Goldfarb and Benjamin Cousins founded a new indie studio named The Outsiders. Now in 2016, the company is showing off a sneak peek at its first game, codenamed Project Wight.

In a nearly three-minute video, Goldfarb explains that the game is set in the early Viking era, except it's an alternate history where humans "share the world with the last remnant of a forgotten species of intelligent creatures." It's a first-person game that puts players in the role of those creatures, who are fighting for survival against the humans.

The video shows gameplay both as a weaker, younger creature, and also as a much more powerful adolescent. The latter is able to fly and dispatch enemies with alacrity.

Project Wight is obviously still in its early stages, but it looks intriguing thus far. There's no word on a release date, or even a release window, but this early look should get the game on gamer's radars.