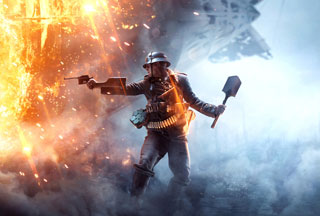 EA is bringing more content to Battlefield 1 in November, including Hardcore servers, custom games, and a week-long Battlefest event.

Battlefield 1 launched last month to great success, with EA reporting that its World War I shooter had doubled the playerbase that its predecessor, Battlefield 4, had at launch. Now, EA has announced its plans for additional content in November.

First and foremost, EA is bringing Hardcore servers to BF1, and they will be a welcome addition. For those not familiar, a Hardcore server typically means that friendly fire will be on, bullets deal greatly increased damage, and the UI will be minimalized, which usually includes removing the crosshair.

Also in the works are Custom games. The first Custom game will be Fog of War, a new Team Deathmatch mode that turns off player name tags and the minimap and cranks up the fog. You'll first see Fog of War at Battlefest, an event that EA calls a "week-long celebration of the Battlefield franchise." It kicks off on November 16, and will include log-in rewards, a unique Battlepack revision, community missions, and a livestream, among other things.

Next, the Suez map has had some changes made for Conquest. In an effort to make the map more balanced, two flags have been added, bringing the map's total to five. Two of the existing control points have had their capture area reduced, and an armored vehicle has been added to each team's base.

Alongside these changes, EA will also launch the Rent-a-Server program, and tweak matchmaking and server balancing in what it calls a "major update" that will be released "during the month of November."

Finally, EA announced that December will bring a brand new map to the game as a free update, named "Giant's Shadow." It's described as an open country map set during the Battle of the Selle in the autumn of 1918. The battle takes place in the shadow of a giant crashed airship.

There's no word on exactly when this update might launch this month, but if you want to see all the info, you can find the post detailing it on the game's official site.