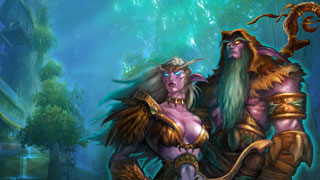 The team behind the popular legacy WoW server Nostalrius isn't happy with the lack of official legacy server news at Blizzcon.

Blizzcon 2016 was held over the weekend, and we saw news about a Diablo 3 necromancer, a new Overwatch hero, and a new Hearthstone expansion. But there was one thing that wasn't mentioned: legacy servers for World of Warcraft.

Fast forward to Blizzcon. There was no info at all concerning legacy servers at the show (just as Blizzard had said previously), and it appears that the Nostalrius team isn't pleased with that. At all.

In an open letter posted to the project's forums, the team voices its disappointment, highlighting the fact that they "decided to take the risk of challenging Blizzard regarding Legacy servers and lighting the flame of hope for one final burst."

The letter also gives an idea of how unlikely the Nostalrius team feels the legacy server announcement might be. "Until they disclose a schedule (if they do), the Legacy community will have to assume there will not be an official Blizzard release of Legacy WoW - possibly for very long time."

Furthermore, the team announces in the letter that due to the lack of an announcement, they plan to release the source code and tools for the Nostalrius server to another legacy project named Elysium, which the letter says "shares the volunteer spirit and passion for the game we had."

Once that's done, the team plans to release the source code and documentation to the public. Of course, it's likely that Blizzard will take steps to prevent this from happening. It's also likely that this decision will be a setback for any momentum that's been gained for the idea of official legacy servers. After all, World of Warcraft game director Ion Hazzikostas spoke to IGN about legacy servers, saying, "There's no question it's something we want to do." Why hasn't it happened yet? "Basically, it's complicated and we're still discussing internally, but it's something we're taking seriously."

We'll have to wait and see what happens, but you can pretty much bet that this story is far from over.