After more than 40 years and five editions, Dungeons & Dragons is finally part of the Toy Hall of Fame.

Whether you love it for the dungeons or the dragons, it's hard to imagine a more influential game in the last 40 years than Dungeons & Dragons. First published in 1974 by TSR, and created by Gary Gygax and Dave Arneson, D&D has been a staple of the tabletop gaming community ever since. It's currently published as the Fifth Edition of the game, but over the years, it's included as many as eight editions, depending on how you count them. D&D not only influenced pretty much every tabletop game that came after it, it also had a huge effect on the world of video games as well. Now, D&D is finally getting the recognition it deserves from the Toy Hall of Fame, as the game was finally inducted this year. 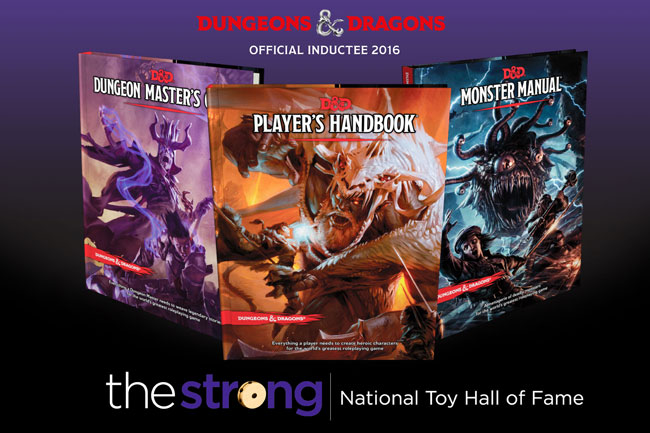 The list of Toy Hall of Fame inductees contains some things you would expect, including classics like the bicycle and the ball, to more modern entries like LEGO and the Atari 2600. Dungeons & Dragons joins that list alongside two other 2016 inductees: Fisher-Price's Little People toddler toys and the swing. The finalists that missed the cut this year include bubble wrap, Care Bears, Clue, coloring book, Nerf, pinball, Rock 'Em Sock 'Em Robots, Transformers, and Uno. That's a pretty good list (except for bubble wrap. Is it fair to call bubble wrap a toy?) to beat out, but I think we can all agree that D&D deserves the honor.

Nic Ricketts, curator of The Strong National Museum of Play in Rochester, New York, which houses the Toy Hall of Fame, said of the news,

"More than any other game, Dungeons & Dragons paved the way for older children and adults to experience imaginative play. It was groundbreaking. And it opened the door for other kinds of table games that borrow many of its unique mechanics. But most importantly, Dungeons & Dragons' mechanics lent themselves to computer applications, and it had a direct impact on hugely successful electronic games like World of Warcraft."

If you haven't spent much time with D&D's Fifth Edition yet, may I humbly recommend that this announcement is as good a reason as any to drag out your dice? Maybe go see what that fellow Strahd is up too. If you'd like to see what the folks at Wizards of the Coast have to say about the news, there are several quotes from the team currently working on the game over at the official D&D website.