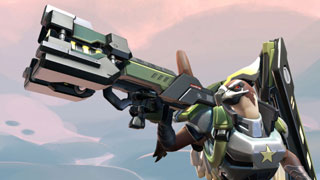 The Battleborn community is holding an event this weekend, and Gearbox is embracing it.

Pretty much everyone knows that Battleborn hasn't done as well as Gearbox had hoped it would. Part of the problem was that the game ended up going head-to-head with Overwatch, despite the two having little in common. Gearbox has continued to roll out updates for the game, including new heroes and new story and multiplayer content. Despite that, the game continues to have disappointing numbers on Steam. So, the Battleborn community decided to do something about it.

Members of the Battleborn subreddit decided to hold Battleborn day tomorrow, November 12. The aim is that this event could convince both lapsed players and new players to give the game a chance, and hopefully bolster the community. The Reddit post by user bkdnx reads,

"So let's talk about why it didn't succeed at the beginning, Overwatch competition, lacklustre marketing, bugs glitches and balancing issues. As time went on the problems shifted to low player base, and a large skill gap, matchmaking.

So the question is how do we bring new players and keep them. Well if we can get an event going for a day where we get as many players online to play as many games as they can, this will solve matchmaking issues and allow everyone to try the game.

As a community of high level elites we should recognise that if we get this going there's going to be a huge influx of newbs. We should be doing our best to not pubstomp and ruin their first impressions of the game so please, no double legendary loadouts. Experiment with new characters and try to keep away from the meta."

In an attempt to help new and returning players out, the subreddit has created what it calls "BattleBros," a group of experienced players who will act as "Big Brothers" to the newcomers. These players say that they stand, "ready to provide advice and guidance to anyone willing to fight to save Solus." If you're interested in their assistance, you can find the list of BattleBros in this thread.

While the idea of the community fighting to save a game they love playing is really cool, what makes it even more fun is that Gearbox has jumped on board as well. The company says in a post on the game's official website that it is "flipping switches to help make this event as epic as possible." Here's what's on tap for the weekend:

These events kick off at 5 PM ET today, and run through Sunday, Nov. 13 at 11 AM ET. If you've ever wanted to try out Battleborn, or wanted to give it another chance, this weekend would be a good time to do so.