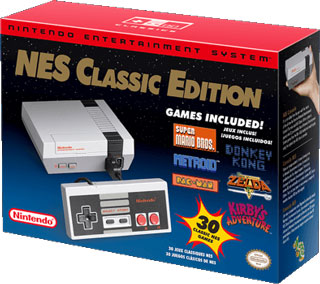 Wal-Mart is now promising that they will have at least some NES Classic units in stock this week.

Nintendo's new NES Classic has been facing some pretty well-publicized supply issues. If you've been trying to buy one, you've had it rough. Odds are you haven't found one in a store or online outlet yet. But if you're vigilant, you just might be able to score the retro console on Wal-Mart's website this week.

The retail giant announced on its Gamecenter Facebook page earlier this week that it would offer "limited quantities" of the hard-to-find console daily at 5 PM ET on Walmart.com. If you click that link and see a $399 price tag, don't panic. That price is from a third-party seller. Wal-Mart will offer the unit at its normal $59.96 retail price.

Wal-Mart's post says that these will only be available through Friday, so if you don't manage to grab one this week, you may have a bit of a wait ahead of you. Nintendo has promised more stock before the holidays, but if you've followed its previous console releases, you know that this isn't the first time that stock issues have plagued the company. Hopefully they can deliver enough units to fulfill all the demand before before Christmas.