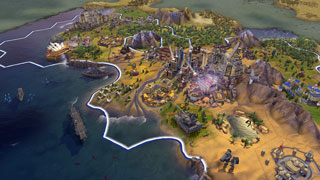 This morning, 2K and Firaxis have released the latest update for Civilization VI. Known as the "Fall 2016 Update," the newest patch brings a number of new features to the strategy game, including support for DirectX 12. The patch notes remind everyone to update their AMD or Nvidia drivers before diving back into the game. The update also adds support for Logitech's ARX system, which allows you to control peripherals, monitor system and game information, and more, all from a second screen such as your phone or tablet.

Also included is a new multiplayer scenario titled "Cavalry and Cannonades," as well as two new map types: "Four-Leaf Clover" and "Six-Armed Snowflake." Both new maps are playable online or offline. The patch notes say that these maps "were designed to encourage more conflict by forcing players to move toward the center."

As usual, the patch also features a number of gameplay fixes. Those include:

In addition to these changes, there are plenty of updates to the game balance and AI tuning, as well as a long list of bug fixes. You can find all the changes included in this update in the full patch notes over on the official Civ VI website.