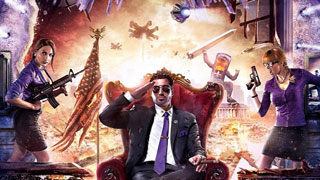 Volition has added Steam Workshop support to Saints Row IV, so you can expect the crazy to get turned up past 11.

Well, we're about to find out. Deep Silver and Volition announced that Saints Row IV now includes support for Steam Workshop. In a statement posted to the game's newly-opened Workshop page, the company said,

"The Saints Row series is all about the freedom to play how you want, and we're now taking that one step further with Steam Workshop support for Saints Row IV PC! It's never been easier to create and install mods that add new weapons and clothing, run custom scripts, and change gameplay values. Head over to the Saints Row IV community hub in your Steam client, click the Workshop tab, and start browsing. It's just that easy!"

Apparently this wasn't an official project, but something the Volition devs did in their spare time. According to the announcement, "A handful of dedicated Volition devs worked on this in their free time to update the engine and remove memory restrictions, as well as finding a way for individual mods to interact and work correctly with each other without the need for running special tools. It was all a labor of love for our fans, and we're incredibly excited to see the crazy content you come up with!"

To celebrate, Saints Row IV is on sale for 75 percent off this week and next week (coincidentally, that roughly coincides with the dates of the Steam sale rumored to kick off later today). You can grab the game on Steam, and head over to its Workshop page to see all the stuff modders have already added. Fair warning, as with SRIV, some of those mods will likely be NSFW.