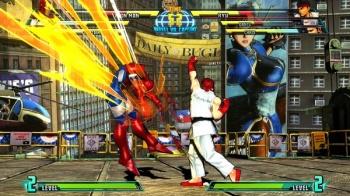 A report from Polygon is suggesting that the next iteration of Capcom's Marvel vs. Capcom brawler will be revealed next week, and released next year. Polygon claims "multiple sources" have told it that Capcom will unveil Marvel vs. Capcom 4 this week alongside Sony's PlayStation Experience event.

One of the biggest caveats surrounding this iteration of the game, is that due to liscensing issues with FOX we're unlikely to see any X-men, or other such "mutants". Expect instead to see heroes from recent movies in the Marvel cinematic universe, such as Ant-Man and Black Panther, as well as Guardians of The Galaxy characters.

Capcom's licence with Marvel expired back in 2013 - a move which forced the publisher to remove Marvel vs. Capcom games from digital storefronts. If Polygon's source is correct, it means that the two companies have made amends.