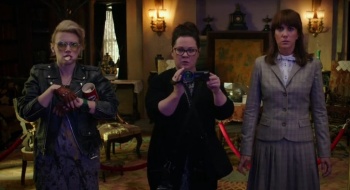 Time to sharpen those pitchforks. Again.

The controversy surrounding 2016's Ghostbusters may or may not have had much of an impact on its overall box office take, but the film underperformed regardless of the way that you slice it. Domestically, it took in just $128 million, and internationally it made even less, grossing $101 million. On a budget of $144 million, and the way that the total take is divided up, it's all but a certainty that the film lost Sony some money.

With disappointing numbers at the box office, talk of a sequel has gone from "definitely happening" to "we'll see, but it's not likely." However, producer Ivan Reitman - who directed the first two films, and produced the newest - recently said that "there's going to be many other Ghostbusters movies; they're just in development right now." However, that does not necessarily mean that there's going to be a sequel to the Paul Feig-directed movie.

So, it looks like the studio is committed to turning Ghostbusters into an even bigger franchise than it already is. It remains to be seen how fans take the news, but you can bet Sony will be listening more closely - for better or worse - to their demands in future outings.