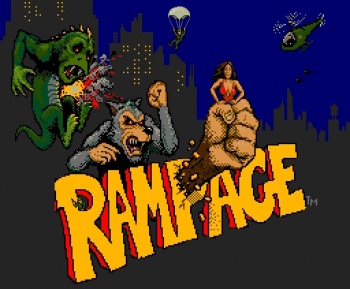 Last year, Brad Peyton and Dwayne Johnson teamed up to bring us San Andreas, AKA every disaster movie ever. And while that's still getting a sequel - the earthquakes are really mad this time? - the two are also going to bring us a Rampage movie.

You remember Rampage, right? You picked one of three monsters and destroyed buildings and ate people. It was lots of fun back in the day. Well, We Got This Covered recently asked him about bringing that sort of video game to the big screen, and this is what he said:

With Rampage, we are using our love of the original game as our inspiration. Then we're going to build a movie, like San Andreas, that is really going to surprise people in what it delivers. It's going to be a lot more emotional, a lot scarier, and a lot more real than you'd expect. So you look at that original concept about a lab that affects these animals and makes them rampage, and that's the nugget. If they called me tomorrow to do Call of Duty, I wouldn't want to play any of the Call of Duty games. I'd have to come up with something that deserves to be its own thing. That's where a lot of these movies can go wrong.

I'm really excited about Rampage. It's a monster film, so the stuff that I did on Incarnate, stretching my muscles in the horror space helped. This "small, character piece" with horror in it trained me to get ready for [Rampage]. Obviously, it's a much bigger movie and it's meant for a broader audience, but there still horror elements, there's still a monster movie at the core. And I get to work with Dwayne [Johnson] again, I'm so excited about it.

I think it's interesting that he thinks not experiencing the source material makes for a better movie, and also that he thinks San Andreas was able to "surprise people."

Source: We Got This Covered