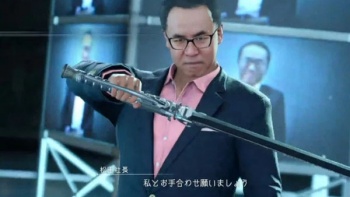 Final Fantasy XV is in this weird timeline where it's sort of in modern times but also not. As such, it's a lot easier for it to draw things from modern pop culture. One of those things is none other than Square Enix President Yosuke Matsuda, who will apparently be added into the game as a boss fight DLC.

Prior to the game's launch, Square streamed a special promotional cut of the game that featured the boss fight with Matsuda. Game director Hajime Tabata confirmed in a stream that it will be available to all players as DLC at some point.

Tabata also briefly talked about the free Holiday DLC that will add New Game Plus and a "Level Cap Creation Feature".

Final Fantasy XV is now available for PlayStation 4 and Xbox One.