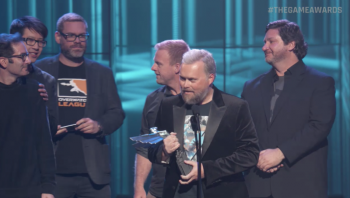 Overwatch won top honors at this year's The Game Awards.

This year's The Game Awards had some really cool stuff, like a live action performance of the Doom soundtrack and some exclusive new gameplay footage, but it is, of course, an awards show, and every awards show has a winner. This year, Blizzard Entertainment's Overwatch took top honors, beating out Doom, Inside, Titanfall 2, and Uncharted 4.