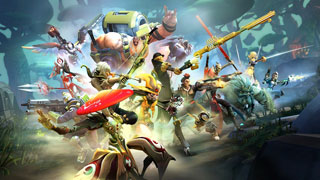 Gearbox is planning a number of changes for new and veteran Battleborn players alike in its upcoming Winter Update.

Battleborn has struggled to connect with players ever since it launched in May. Despite the game's quality, it's faced issues from strong competition (Overwatch) as well as complaints about barriers to entry and grindy gameplay. While Gearbox can't do anything about its competition, it is planning a major update this winter to address the other complaints. The just-announced winter update will include changes targeted at both new players and veterans alike.

For new players looking to find their favorite character to play, the winter update will unlock all 25 core characters as soon as you finish the prologue. It will also change the character unlock challenges to award a new skin upon completion, as well as adjusting a number of those challenges to be more obtainable. In addition, the Story Mode missions will have "more guides and tools" to help you find your way through. Credit rewards have also been increased to aid in the acquisition of loot packs in the early game.

The update will also add two new training modes for new players. One will teach the ins and outs of Incursion, first to you as a solo player, and then with friends whenever you want to reply it. It will also add the Dojo, which will let you try out every Battleborn character against waves of enemy minions.

Veteran players can expect to see a number of changes as well. The game's user interface is getting an upgrade in nearly every area, from the start screen to the character select and menus. A new Draft Mode is being added, allowing players to take turns picking and banning characters to make the perfect matchups.

Also coming in this update are daily quests and increases to character and command ranks. The Credit system has been overhauled to award more credits for public PvP matches, and Loot Packs have had some changes made as well.

The update doesn't have an exact release date just yet, but Gearbox plans to stream all the details from the update on its Twitch channel tomorrow, Dec. 8, at 5 PM ET. You can tune in there to learn more, or you can just read Gearbox's post on the game's official site.