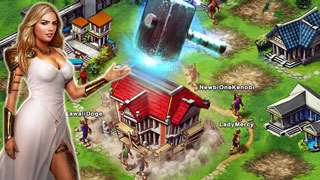 A California man embezzled nearly $5 million, and spent a chunk of it on free-to-play mobile title, Game of War.

It's not unusual to hear a story of a gamer going overboard spending money on a free-to-play mobile game, but some people take it to new heights. Case in point: Kevin Lee Co of Sacramento. The 45-year-old recently plead guilty to wire fraud and money laundering after embezzling $4.8 million from his employer over seven years.

That's egregious enough, but it turns out that in addition to using that money to purchase luxury cars, plastic surgery, home furniture, San Francisco Forty-Niners and Sacramento Kings season tickets, and a golf club membership, he also dropped about $1 million on a mobile game - specifically, Game of War. The amount came to light in a document dug up by Ars Technica and summarized on MoreLaw.

Game of War is well known for both its advertising starring supermodel Kate Upton and singer Mariah Carey and the fact that it has made as much as $1 million a day in revenues. Earlier this year, VentureBeat reported that paying members of Game of War averaged almost $550 in yearly spending.

As a result of his actions, Co is looking at a maximum of 20 years in prison for each charge (one for fraud and one for money laundering), as well as a combined $750,000 in fines. Of course, there's a plea deal in place that includes a recommendation for a reduced sentence, so there's no telling what the final outcome may be.