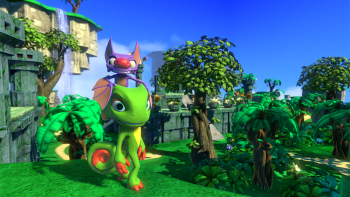 Yooka-Laylee will launch in April 11, 2017, according to an ad on the Microsoft store.

Update: A representative for Playtonic Games has confirmed to The Escapist that the April 11 release date is indeed correct. It will be released for the Xbox One, PS4 and PC simultanously. Additionally, the representative has confirmed that the Wii U version of the game has been cancelled, as the team is looking to shift development to the Nintendo Switch.

Any backers who pledged for the Wii U version will be able to move their pledge to any of the three versions launching on April 11 or upgrade to the Nintendo Switch version when further details are announced in 2017.

Original Story: The folks over at Eurogamer have spotted this ad for Playtonic's Yooka-Laylee over on the Microsoft store, suggesting the game's official retail release date is April 11, 2017. You can pre-order the game right now for $39.99.

Playtonic hasn't officially announced the release date but with the page live on the official Microsoft store we can expect to hear it in the near future.

Yooka-Laylee was originally expected to launch in October 2016, but was pushed back to Q1 2017 earlier in the year. "While we felt confident we could ship the game in October as originally projected in our Kickstarter, the Playtonic team has decided that it would prefer to add a few extra months' polish to the game schedule," said Playtonic at the time, adding that the delay will allow the team to deliver "a better game."

While April is technically pushing into Q2, at least we now have a solid date for the game.