The latest Call of Duty is offering a five-day free trial to console players, but not to those who play on PC.

Yesterday, Activision announced that it will offer up a free trial of Call of Duty: Infinite Warfare this weekend for anyone who wants to try out the latest entry in the venerable series. In the wake of stories that physical sales of the recently-released shooter had fallen nearly 50 percent, Activision is giving players the opportunity to not try out the multiplayer, but campaign and zombies modes as well. 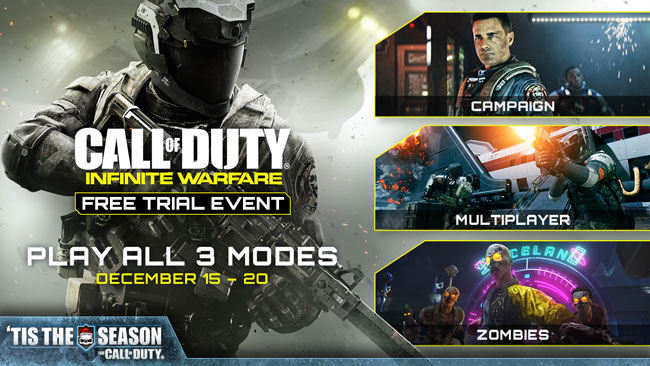 The free trial will kick off at 1 PM ET Thursday, December 15, and run through 1 PM ET Tuesday, December 20. It will include the first the first two levels of the game's campaign, titled "Rising Threat" and "Black Sky." Players will also be able to play the multiplayer - albeit with a level cap of 15 - and the Zombies mode, which will have a level cap of 3. If you buy the game, all of the progress you make during the free trial will carry over.

While that sounds like a pretty good deal, there are, as always, some caveats. Chief among those is that the trial is only available on PlayStation 4 and Xbox One. There's no corresponding free weekend on Steam for PC gamers. If you're planning to play on console, you should be aware that to play any part of the free trial on Xbox One requires you to have an active Xbox Live Gold account. On PS4, you can play the two campaign levels without PS Plus, but you'll need it to jump into multiplayer or Zombies.

This isn't the first time we've seen a free weekend offered up for a Call of Duty game, but it's definitely happening sooner after launch than we're used to. The inclusion of two campaign missions also feels like a bit more than we're accustomed to getting. It's just a shame that Activision couldn't manage to extend the trial to PC.

You can find more information about the free trial in this official blog post. You can get answers to your questions, and see all the restrictions on the trial, in this article on the Activision support site.