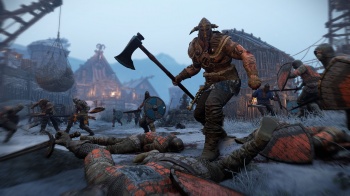 Ubisoft has confirmed that its upcoming historical action game For Honor will have all of its DLC maps and modes released for free.

Last month Ubisoft announced that it would no longer be charging for "game experience affecting" DLC, and it seems to be sticking to its guns with upcoming action game For Honor. The studio confirmed in a presentation that all DLC maps and modes for the game would be free for all players, an an effort to avoid fracturing the game's community.

"Everything that's matchmade [including] new modes and new maps, will be given for free to the players. We'll also have other free content. We are a big team supporting the game after launch," said game director Damien Kieken.

It's likely that the game's paid DLC will instead be focused on new heroes, in a similar fashion to how Rainbow Six: Siege let players buy new characters while giving away maps for free.

"On the monetisation side," said Kieken. "The idea is that we allow players to buy more Steel. It's just a shortcut. Everything is unlockable just by playing the game. And all shortcuts are tied to progression, so you can't unlock an end-game item right away."

Steel is the game's in-game currency, that can be earned for free by completing games.