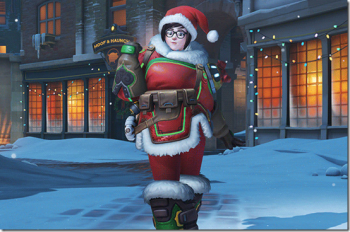 Blizzard assures its Mei fans that Mei will be getting another legendary skin "early next year".

Overwatch got itself a winter event earlier in the week, showering players with plenty of seasonal goodies for their favorite characters. Except Mei, apparently. Fans were disappointed that the character's first new Legendary skin to be added since the game launched, wasn't particularly legendary, and appears to be a mere re-color of her standard parka with the addition of a Santa hat. Blizzard has noted this, and apologized, saying it was "off" on the coolness factor this time, but not to fret, as they have something special in store for Mei early next year.

Game Director Jeff Kaplan had this to say:

"Hi there. Sorry you are disappointed with Mei's winter skin. We don't have a specific rule for what makes something Legendary or Epic. We just sort of make a gut call based off of what we think is cool. Coolness is very subjective, and based off of the community reaction it seems like our gauge was off on this one. Our reasoning for it being Legendary was that we completely redid the visual effects for Cryo-Freeze (we turned the ice block into a snowman). We thought that was pretty special and we had done it specifically based on community suggestions from months ago when people were speculating that we might have a winter event. Apparently, lots of people don't agree with us and that's ok. It's all good feedback and we're learning something for future events.

For people concerned that Mei is not going to get another Legendary for a long time, you need not worry. We have something pretty awesome for her early next year.

Apologies that our "cool meter" was off from yours on this one. We'll try to align better on future content."

Like Kalpan said, the snowman Cryo-Freeze is certainly a cool addition, but doesn't really justify the rest of the skin being so plain.