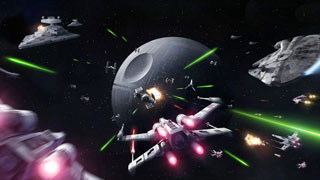 If you're a fan of Star Wars: Battlefront, this weekend would be a great time to log in and play a few maps. EA and DICE are offering a little Christmas bonus for anyone who logs in from December 23 - 25.

The special weekend event includes a one-time gift of 5,000 free credits, double XP throughout the event , and best of all, you can access all of the maps and modes from the Death Star expansion for free.

That means for the weekend, you'll be able to play all five maps: Imperial Blockade, Defense Sector, Power Sector, Command Sector, and Death Star Surface. You'll also be able to try out Battle Station mode, which includes the Death Star trench run. The announcement only mention maps and modes from the expansion as being free, so you may not be able to try out Chewbacca and Bossk, the two new heroes that the expansion added.

Regardless, it's a nice boon if you're a fan of the game. You can find all the details over on the game's official site.