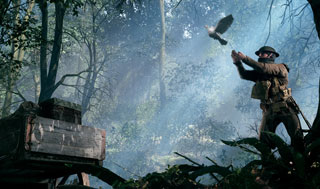 If you log in to Battlefield 1 from now through December 29, you'll get access to some special holiday goodies.

Yesterday, EA and DICE announced the Battlefield 1 holiday event. Starting yesterday and running through December 29, there are a number of in-game events and giveaways planned. It began with the launch of a new custom game title "Blind Delivery."

Blind Delivery is a tweaked version of the War Pigeons game mode. The normal game mode requires you to find the pigeon in its coop, pick it up, and survive long enough to complete writing a message. Then you just run into the open and release the pigeon to score a point and rain down artillery on the other team. Blind Delivery changes that up by removing the minimap, and only allowing players to use handguns and explosives.

Starting today (December 22), anyone who logs in during the event will receive a "Holiday Truce" dog tag. Today also marks the introduction of vehicle skins to the game. The newest Battlepack revision will give you the chance to obtain two Heavy Tank skins: the Distinguished "SchnucK" or the Legendary "Desert Gold."

The last two incentives are active from December 23 through December 29. the first is that anyone who logs in during that period will receive a free Battlepack. The second is a bonus benefit for players who own the BF1 Premium Pass. Those gamers will also receive two Superior Battlepacks.

The event is underway now, so if you want to get in on the fun, all you have to do is go play. If you don't own BF 1, the Standard Edition is on sale on Origin right now for $35.99.