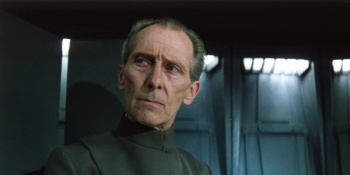 Warning: This story contains light spoilers for Rogue One.

In Star Wars spin-off Rogue One, Grand Moff Tarkin returns to take command of the Death Star, despite original actor Peter Crushing having died over twenty years ago. He, along with a short snippet of a young Princess Leia herself, are brought back to life through the magic of CGI. The use of these two CGI characters (though Tarkin in particular) has been a big point of contention among fans, but now producer Kiri Hart and Industrial Light and Magic creative officer John Knoll have come out to defend the practice.

If he's not in the movie, we're going to have to explain why he's not in the movie," said Hart in an interview with The New York Times. "This is kind of his thing." Knoll elaborated by stressing that it was "done for very solid and defendable story reasons. This is a character that is very important to telling this kind of story." He added that alternatives, such as having the character appear off-screen, or as a hologram, were discussed, but ultimately unused.

On whether this sort of thing will start to become commonplace (Captain America: Civil War also used CGI to make Tony Stark appear much younger in one scene), Knoll does not think so. Creating the CGI Tarkin for Rogue One was incredibly expensive and time-consuming. "We're not planning on doing this digital recreation extensively from now on," he said. "It just made sense for this particular movie."

Personally, I think that CGI Tarkin was the worst part of the whole movie, and that's saying a lot. What did you guys think?