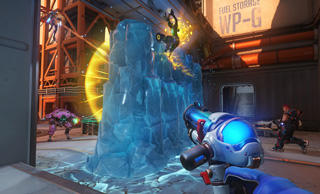 Not only is Blizzard planning to fix the Mei ice wall glitch in Overwatch, it plans to punish those who abused it.

Overwatch is unquestionably one of the most popular games of 2016. As with any multiplayer game, though, people are finding ways to exploit it. One of the more annoying exploits is a glitch where the character Mei creates an ice wall, and it throws a player outside the map. From there, they can shoot the other team, but cannot be shot themselves. If you're sick and tired of getting shot by someone outside the map in Overwatch, you're going to like what Blizzard had to say about the issue.

It turns out that the glitch was a little bit challenging to identify and track down. In a post on the Overwatch forums, game director Jeff Kaplan said, "This bug was surprisingly tricky for us to track down but we believe we have identified a fix. Our hope is to have it fixed sometime tomorrow (1/5/2017 PST) but there is always the chance that our fix could fail. We're currently testing to verify the fix."

That's great news, but what's even better is that Blizzard plans to take action against the people who have exploited this glitch in the past. Kaplan warned in his post,

"This bug is clearly an exploit and we consider this cheating. Do not attempt to reproduce this bug. If you see someone abusing this mechanic, please report them.

We will be taking action against those who abused this exploit. Overwatch is a PvP experience so that means exploiting game mechanics like this comes at a cost to those you are competing against. We take aggressive action against people who abuse game mechanics, hack or cheat. This case is no different. Apologies that this bug lingered for as long as it did. Hopefully this should go away soon (along with those who abused it)."

It's nice to see that Blizzard is not only fixing the issues in Overwatch, but holding those who have abused the issue to account as well. Of course, there's sure to be another bug/exploit pop up in the future, but players can at least take solace in the fact that those who exploit it will get their just rewards.