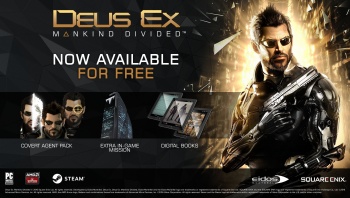 A free patch for Mankind Divided has awarded all players with the game's various pre-order bonuses.

If you didn't pre-order Deus Ex: Mankind Divided and are now worried that the exclusive pre-order DLC will never be obtainable, fret not, for Square Enix has quietly released a patch today that makes said DLC free for all players! Hooray, I guess, for proving just how stupid and pointless pre-order culture is.

The pack contains the Desperate Measures extra in-game Mission, a compilation of skins for Adam's armor and trench coat, a re-skinned pistol and combat rifle, and various consumables. It was previously exclusive to those who pre-ordered the game on Steam, or via various participating retail partners.

PC users will simply find the extra content added as soon as they boot up the game, while Xbox One and PS4 owners will have to download the free DLC from their respective in-game stores.

Three digital books, the novella Deus Ex: Hard Line, written by James Swallow, the mini-comic The Dawning Darkness, and a mini-artbook are also available for free through this link.