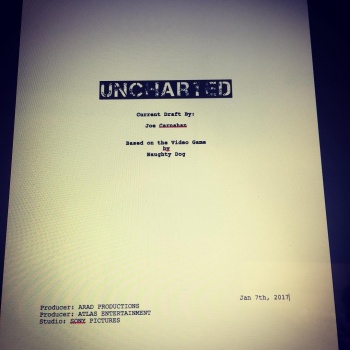 We're one step closer to the Uncharted movie.

It was over half a decade ago that we first heard rumblings that an Uncharted movie was in the works. Remember when it was going to star Mark Wahlberg, Robert De Niro, and a brought-out-of-retirement Joe Pesci? Yeah, those were the days. Then, we heard very little, and the project changed so many hands that we wondered if it would ever get done.

Well, it's back in the public consciousness.

Screenwriter Joe Carnahan posted on Instagram that he has completed work on a screenplay for Uncharted - at least, a draft of it. He wrote:

Done and Dusted. Now the REAL work begins. If there's a more monstrously cool action script in Hollywood right now, I wanna read it, 'cuz this thing is a BEAST.

It's not surprising to hear an artist hype up his work, but it's also very easy to be skeptical about the quality of screenplay that comes from adapting a video game. After all, the "best" ones have mostly just been passable entertainment.

Regardless, it's the next step in finally getting the project off the ground. At present, Shawn Levy is attached to direct, and filming is supposed to begin early this year. Will it happen? And, maybe more importantly: Do we even want it to?