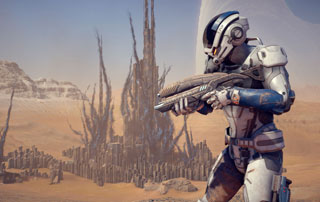 EA has announced the pre-order bonuses for Mass Effect: Andromeda, as well as revealing it will not have a season pass.

If you've been wondering just how much the Season Pass for Mass Effect: Andromeda is going to cost you, brace yourself. EA has announced today that just like Titanfall 2, the upcoming game won't have a Season Pass at all.

The announcement comes from Bioware general manager Aaryn Flynn's Twitter account. When asked if Andromeda would have a season pass, Flynn said, "Nope." He later said that Bioware would talk more about the DLC that will be coming "later."

The game will have pre-order bonuses, of course. With the Standard Edition ($59.99), you'll get the Deep Space Explorer Armor, a Nomad skin, and a multiplayer bonus pack that includes five 50 percent XP boosts. Pre-ordering the Deluxe Edition ($69.99) adds a Pathfinder Casual Outfit, a Pathfinder Elite Weapon Set, Scavenger armor, a pet Pyjak, the game's digital soundtrack, and a multiplayer launch pack of weapons and equipment. Going to the Super Deluxe Edition ($99.99) adds a weekly Premium Pack for 20 weeks that is loaded with boosts to speed your progression.

You can see all the pre-order bonuses over on Origin.

Mass Effect: Andromeda is due to release on PC, PS4, and Xbox One on March 21. As has been the case with recent EA releases, Andromeda will be available early to EA and Origin Access subscribers, but Bioware has not detailed what that early access will include.