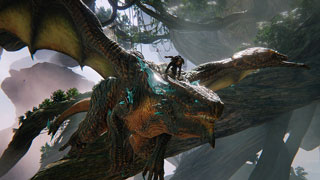 After some rumors were swirling earlier today, Microsoft has confirmed that Scalebound, the Xbox One and PC title from Platinum Games, has been cancelled.

If you've been hoping to get your hands on Scalebound, Platinum Games' planned action role-playing title, you're not going to like this news. Microsoft has announced that it has parted ways with Platinum, and development of the game has been officially cancelled.

Scalebound was first announced during the Microsoft press conference at E3 2014, and popped up again at Gamescom in 2015, where a four-player cooperative mode was announced. It was delayed to 2017 a little over a year ago. Little has been heard from the game since then, and its social media channels have been quiet since September, when rumors began to suggest that development was in trouble.

The cancellation came amid rumors earlier today (reported by Eurogamer) that work on the project had concluded "before the end of 2016." There was also speculation when the game did not appear in a recent Xbox Wire post showing off Microsoft's planned releases for 2017.

Microsoft has now confirmed the cancellation in a statement to Windows Central, saying,

"After careful deliberation, Microsoft Studios has come to the decision to end production for "Scalebound." We're working hard to deliver an amazing lineup of games to our fans this year, including "Halo Wars 2," "Crackdown 3," "State of Decay 2," "Sea of Thieves" and other great experiences. For more information on our 2017 plans, please visit: https://news.xbox.com/2017/01/05/xbox-closes-milestone-year-in-2016/."

There's no word on whether Platinum Games will continue development of Scalebound without Microsoft, and in fact it's not clear who owns the IP, but Microsoft trademarked the name back in 2014. Of course, the terms of the contract between Microsoft and Platinum may affect that IP ownership in light of the cancellation, so we will have to wait and see.