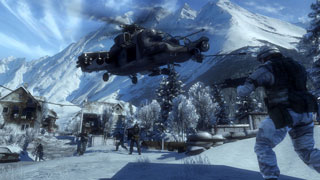 The first seven Xbox One backwards compatible titles of 2017 are available, including two Battlefield games.

Microsoft has been slowly increasing the size of its Xbox One backwards compatible game list, and today, that list got seven games longer. Backwards compatibility was added in November of 2015, and the list of games now includes over 300 titles.

These seven games were added today. They can be purchased from the Xbox One store for the listed price, or you can throw in your Xbox 360 disc copy to download the XB1 version.

If you already own these games on 360, now's the time to go check them out on your Xbox One. If you don't already own them, the prices listed above may be a little steep for games from last generation.

It's nice to see Microsoft adding as many games as possible to the backwards compatible list, but it's a shame that the games won't just run off the disc. Being forced to download the older games you want to play can seriously eat up your hard drive space.

Ghostbusters - It Has Women in It! Marter 71 Comments