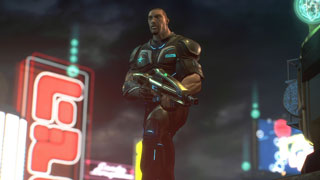 Microsoft moves to assuage worries about Crackdown 3 following the cancellation of Scalebound.

After the recent cancellation of Scalebound, gamers have been a little nervous about other games that are in the works at Microsoft. One of the game that tops that list is Crackdown 3, the next game in the open-world, action-adventure series. Luckily, Microsoft was quick to step up and reassure gamers that all was well with the upcoming title.

In a statement to PCGamesN, a Microsoft spokesperson said, "As mentioned yesterday, Crackdown 3 is not affected and still on track. We look forward to delivering a high-quality experience to gamers and will share more in the coming months."

That's good news for fans of the series. Crackdown 3 was announced at the same E3 2014 press conference as Scalebound, and was originally slated to release in the summer of 2016. When it was delayed to "holiday 2017 or earlier," and then didn't show up at E3 at all last year, there were some concerns that it might meet the same fate as Scalebound. Thankfully, it sounds like that will not be the case.

We still don't have a firm release date for Crackdown 3, but it sounds like it will likely make it to stores sometime this year.