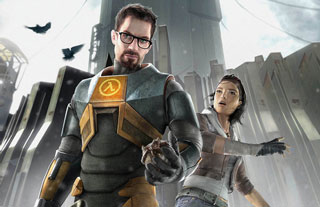 According to an alleged Valve insider, the true unicorn of PC games - Half-Life 3 - may never see the light of day.

If there's one game that PC gamers everywhere still dream about playing, it Half-Life 3. It shows up on lists of most wanted games with regularity, and it's mentioned every time what Valve might be working on comes up. If you're a regular listener to our Escapist live podcast (shameless plug - every Friday afternoon on our Twitch channel), you know that we've discussed it a couple of times of late and come to the conclusion that Valve probably won't release it, because the game can never live up to expectations at this point.

Valve may have the same attitude toward Half-Life 3 at this point, if a new interview posted on Game Informer is any indication. The interview was actually conducted in 2015, but Game Informer's Andrew Reiner has spent quite a bit of time since trying to confirm the information he was given with another source. After being unable to do so, he shelved the interview until now, when it was published with a warning to take everything within with a grain of salt.

In the interview an unnamed Valve insider says of the Half-Life series, "I don't think there will be any more," and then goes on to say, "The idea of delivering a third episode of Half-Life 2, that's dead. There's no universe where that will happen. I think there is a universe where a standalone thing could come together to fill in that hole, but that's tough."

More important, the unnamed insider says, Half-Life 3 was never a thing that existed at Valve. "There is no such thing as Half-Life 3. Valve has never announced a Half-Life 3. The closest they've come is after Half-Life 2, they said there would be three episodes."

So why not do a sequel now? The risk of disappointment and the difficulty of deciding on a direction are both factors, the source says.

"What they don't want to do, in a George Lucas type of situation, is deliver something like Star Wars: The Phantom Menace. There may be no avoiding that. It's so tempting. So f---ing tempting. The reality, though, expectations are everywhere. Where is the bar? If you don't reach that, people will be disappointed. That will be the legacy.

All we know is we love what we had before, but everyone has a different idea of what Half-Life 3 should be. The best thing they could do is give up on Half-Life 3, avoid it entirely, and do Half-Life experiences instead. Experiences that connect, but aren't the flagship sequel."

It's an interesting interview, and it offers some insights not only into the Half-Life series, but into how the flat, leaderless structure at Valve can both help and hinder projects, and how relationships work inside the company. The big takeaway, though is why Valve doesn't discuss Half-Life anymore.

You can read the full interview over at Game Informer