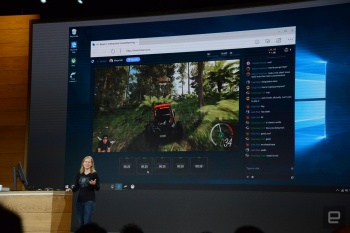 We don't know the full specifics of Windows 10's upcoming "gaming mode," but Microsoft claims it will increase performance for many games.

Microsoft has revealed that it will be rolling out something known as "Windows 10 Game Mode" as part of Insider previews "this week." Game mode is a piece of the gaming-focused features the company promised as part of its big "Creator Update".

We aren't completely sure on the specifics of game mode just yet, but the company has promised it will fine-tune your PC to speed up gaming performance on both older Win32 applications as well as the new, controversial UWPs.

"Our vision is for Game Mode to optimize your Windows 10 PC for increased performance in gaming," said Microsoft.

Additionally, both the Windows and Xbox One will receive Xbox Live upgrades that help you connect to friends on social networks, a more social-friendly Activity Feed, better tools for Clubs and looking-for-group posts, and the option to start your own Arena tournaments.

We'll let you know when we know more about this gaming mode and how exactly it works.