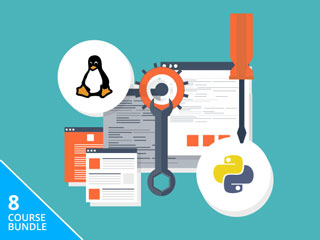 Why are big companies clamoring to get white hat hackers on their team? Because they can think like a malicious hacker, but better - they can outsmart them, too, keeping companies safe from attacks. If you've been thinking about getting into this lucrative field, now's the time to pick up the skills you need: you can pay what you want for the White Hat Hacker 2017 Bundle at Escapist Deals.

Pay below the average price, and you'll get access to two of the eight courses in the bundle, one on using Python for Android hacking, and another on Wi-Fi hacking. Valued at almost $400, it's a great deal - but if you want more training, you can get an even bigger deal when you beat the average price and get all eight courses valued at $1,271. That includes training in the basics of ethical hacking, an intro to accessing the dark web, a crash course in common web security attacks (and how to mitigate them), and even exam training for the CISSP, one of the top security certifications you can get. This bundle gets you lifetime access to everything in it, so there's no rush to get up to speed - unless, of course, you want a lucrative new career ASAP.

Get started with two courses or all eight - it's up to you. Pay what you want for the White Hat Hacker 2017 Bundle at Escapist Deals.