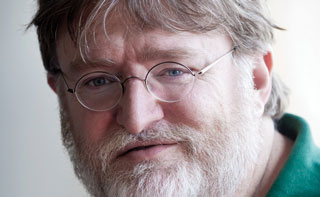 If you want to ask Valve's head honcho a question, you can do it on Reddit today.

Valve President Gabe Newell is an interesting figure. Since founding the company in 1996 (after leaving Microsoft), he's been a recognizable name in the gaming community, and even has a subreddit dedicated to him (that was founded only last Friday). That subreddit will play host to something that will likely be enormously popular later tonight, as Newell himself visits Reddit for an AMA.

If you aren't familiar with a Reddit AMA, it involves someone of note coming to the site, and answering question from users for a set period of time, typically with the help of a Reddit staffer. You can find the timing for the AMA in this thread, although the AMA will take place in a different thread, according to the moderators, and they have offered some pre-AMA information.

If the timing of this AMA seems a bit odd to you, you are not alone. It was just a week ago that an interview with a "Valve insider" claiming that Half-Life 3 will probably never happen was published. Since then, there's been a "Gaben" subreddit founded and they've gotten an AMA with the man himself. It may be coincidental, but it seems unlikely.

The AMA kicks off at 6 PM ET today. We'll keep an eye on what transpires there, and let you know if it's interesting. You can bet that someone will ask about something with a three in it.