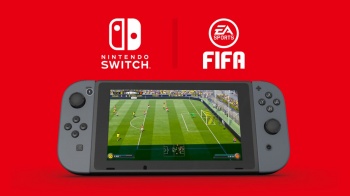 EA is optimistic about what the Switch is doing, but doesn't have any plans for additional games past FIFA.

At Nintendo's big Switch reveal, it boasted the support of many developers, big and small. This includes gaming giant EA, which announced a new version of FIFA built exclusively for the console. However, this doesn't constitute EA's unwavering support, as executive vice president Patrick Soderlund explains in this interview with IGN that whille the company is optimistic about Nintendo's new toy, it's very much a "wait-and-see" approach the company is taking.

"We have the benefit of being a platform agnostic company," he said. "We will be at whatever platform the consumers are. New hardware is always a positive for our industry. It allows us to push forward."

As of now, FIFA is the only game EA has announced for the system, which Soderlund says is due to it being "the brand that spans across the most markets. It's the brand that spans the biggest age demographic. It's a mass market proposition. It's a game a lot of people want to play." When asked about future EA titles he said "We are not announcing anything [else] yet, but you can expect us to be there once the platform launches and takes off."

Soderlund did have a lot of nice things to say about the Switch, however, praising Nintendo for forcing developers to think differently, and changing conventions. "What I like about Nintendo is that they come to the table with a slightly different approach," he explained.

So don't hold your breath for the likes of Mass Effect or Dragon Age on the Switch until things start taking off.