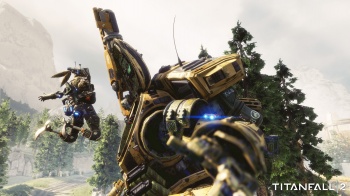 A lot of devs have been "umming and ahhing" about having their games on Nintendo's upcoming Switch, but Respawn Entertainment, the folks behind the Titanfall series, have made it very clear that the Switch isn't powerful enough for its games. In an interview with Drunk Tech, Alavi responds with a brutal "Fuck no!" when asked if Titanfall will ever make it to Nintendo's new machine.

"I was excited about [the Switch]. Nintendo's been in such a niche market recently, catering to the handheld and the kids, they've been so underpowered that they don't have the support of the third parties because they're all making for the PC, Xbox One and PS4, and it's no different," commented Alavi.

When the interviewer asks him if he'll be able to play Titanfall on it, Alavi said "Fuck no! No, you're not going to be able to fit Titanfall 2 on the Nintendo Switch. That's the same Zelda from the Wii U."